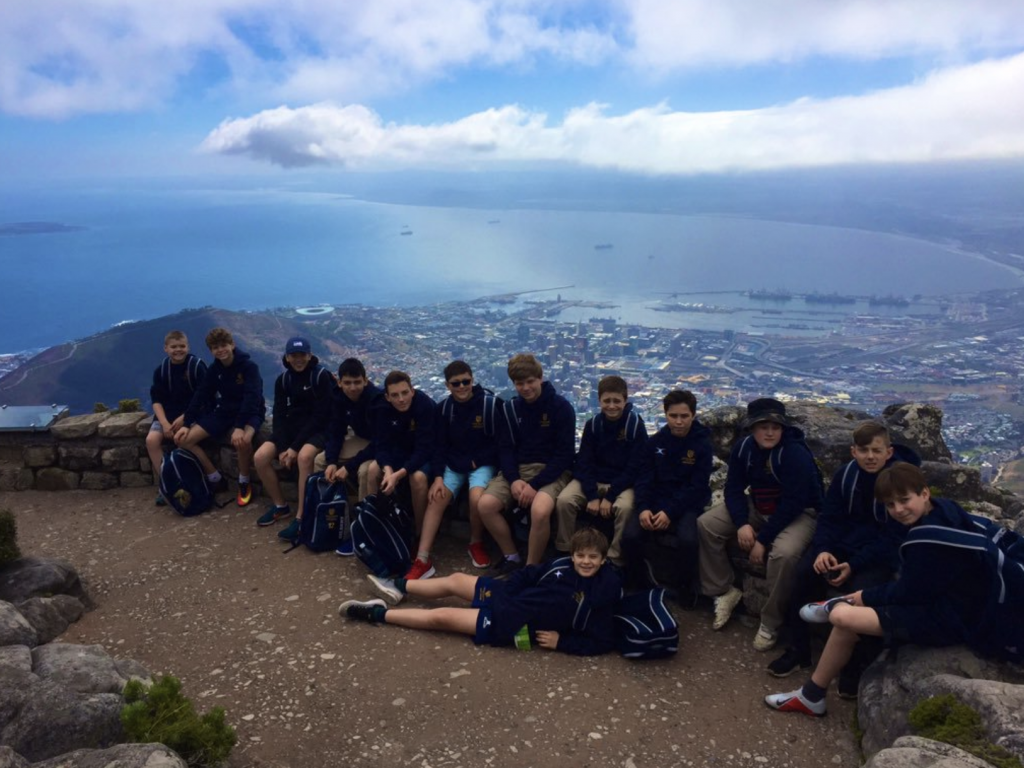 On 29 March 2019, 13 pupils embarked on what would prove to be a momentous trip to South Africa, the first international trip and sports tour in the School’s young history.

After a long flight, the boys landed in Cape Town and were eager to get the trip underway. Within the first few days, they had climbed Table Mountain (a flattop mountain that overlooks the whole of Cape Town), met and interacted with cheetahs and spent glorious evenings on Cape Town’s beautiful waterfront.

On the second day, the tour began in earnest as our boys played their  first fixture against Parel Vallei School in both football and hockey. This was a historic moment for ESM and a special one for the boys who took the field that day as they came up against teams from across the world for the first time. Our pupils  engaged fittingly, exhibiting strong sporting skill to win one of the matches and suffer narrow defeat in the other. Above all, they demonstrated fantastic sportsmanship and camaraderie with their contemporaries from another continent. This was highlighted by the wonderful atmosphere at the post-match tea, where the boys from the two schools mingled, spoke, and shared stories with their new friends.

After a successful start to the trip, the boys moved East and met ostriches, tackled tight caves, and enjoyed being out of the city. The next couple of matches saw the squad’s first-ever hockey match on grass and they adapted to their new style of pitch quickly and brilliantly.

Further along the coast, the tour spent time interacting with elephants and monkeys and got to see the exotic birds of South Africa. Stunning views of the Indian Ocean were seen from the third hotel which also included a small golf course, much to Mr. Keyte and Mr. Bristow’s delight(!)

During the third part of the tour, the pupils overcame even more challenging obstacles, tackling a zip-line tour of the canopies of a nearby forest, before taking to the water and learning how to kayak in the choppy final stretches of a river. This experience also allowed a few of the boys to continue to challenge themselves with a few natural diving boards several metres high.

Before the final stop, the third set of matches saw another grass hockey pitch, and a tight game followed by a fantastic match and a real show of strength from the boy’s football team. This display was, again, followed by an excellent example of the maturity of our pupils in engaging with those from the other end of the world at the post-match luncheon.

The final stop was without a doubt the perfect way to end the trip. A couple of nights at a secluded game reserve gave all those on tour a chance to rest and recover. From the evening game drive where the team saw lions in their natural habitat, to the horseback safari where they rode alongside zebras and giraffes, and to lounging by the pool with impalas and kudus grazing in the valley below, the time at Bottlierskop Game Reserve was thoroughly enjoyed by all.

Before departing for London Heathrow they tested themselves against one more school, unfortunately losing a close hockey fixture but once again winning at football. This game and the others allowed our pupils to test their skills, build on their abilities and work together as a close-knit cross-year unit.

We would like to thank all the pupils for acting as fantastic ambassadors for the School, as well as the parents and Heads’ for their support of the tour. South Africa was an unforgettable and life-changing experience – where to next year?!

Congratulations to the pupils who won the following:

Categories:
Senior, Trips
Back to the top
You're Invited!

We warmly invite you to our Senior School Open Morning on Tuesday 7 February at 9.30am.

We are delighted to be offering a limited number of 100% bursaries to more able students who are academically high achieving for Year 12 – 2023 entry, email admissions.senior@eatonsquareschools.com for more information.